The weather outside is frightful, by the way 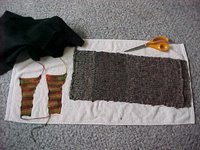 So this is what I have at the moment. The bag is pinned out and blocked, and I have bent all my pins by pinning it into the carpet because I don't have those pinny-out tile things that real knitters have. The two coloured bits are for the sides of the bag, and I may or may not need them. I thought I would not have enough tweed to do a handle that went all the way to the bottom of the bag, so I made sides in nice bright wool and it took me about two seconds compared with working with the tweed.

Ah, the handle...I am using the tweed cos I have lots of it, but I decided to knit on smaller needles that the main bag because I figured the handle needs to be pretty robust. It's killing me. I am knitting nine stitches in a row, that's it, and it takes forever. Each stitch has to be yanked through, hard. At the end of each row, I sit and look at it for five minutes and try to decide whether to carry on or rip it out and go back to the big fat needles.
Incidentally, it is still snowing, and the temp. is currently minus 26 degrees C. I need to go out for milk and bread this afternoon. Yesterday when I went out in this temperature, the tiny letterbox of my face that was exposed to the cold, around my eyes, got windburned. On the weekend the Vanier Cup - the national university football tournament - was held here, and the temperature on the field was minus thirty.
Today's factoid - the Saskatchewan University campus is officially the second coldest in the world. The coldest is Moscow.
And finally, in case you think I seem to have an awful lot of time on my hands for mindless yakking and knitting, may I point out that today is my "kend" - ie the second day of my weekend. And I am prevented from doing very much else today because it's So. Flippin. Cold.
Posted by Amber at 14:54