You are hereby notified that my attitude towards team sports has changed somewhat in the last 24 hours.

Somewhat - because I still can’t abide all that abject worship of overpaid manboys - but that aside. You may consider me the newest-born Fan of the Freo Dockers. 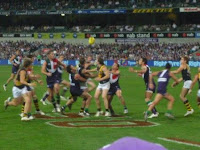 I have less than no idea of the actual Rules of Aussie Rules. Luckily, the Dockers ticket people had obligingly selected a seat for me in close proximity to A SHOUTAHHH!!!! So I can provide for you full commentary and thorough, pinpoint-accurate analysis of yesterday evening’s match against Richmond.

The facts ascertained:
There are four quarters of half an hour each
Everyone is very tall
It’s a bit like rugby, only not very, because the whole thing is a lot more streamlined and there is much less biffing and pointlessness
The refs all look ludicrous, no matter what they are doing, but especially on a throw-in, where they practically upend themselves in a spectacularly comical over-the-head backwards dive manoeuvre
There appear to be eighteen players per team on the field, which seems an awful lot
There are no sleeves
The kick-off involves the ref slamming the ball as hard as he can physically manage into the ground, as if chucking a major tantrum

(The Dockers mascot, who appears for approximately nine seconds at the start of the match and subsequently never again, is rubbish. He is simply a Dockers player made out of foam. He looks like a bad children’s book superhero character who has a name composed of lots of Z’z and exclamation marks.)

First quarter
The match begins. Four seconds later:
Shoutah: (NAME I COULDN’T MAKE OUT), YOU’RE NOTHING BUT A HAAAAACKK!!!!!
By the eleventh second:
Shoutah: (SOME OTHER NAME), YOU'RE PLAYING LIKE A GALAAAAAHHHH!!
At approximately twenty four seconds:
Shoutah: (THIRD NAME), PISS OFF BACK TO VICTORIA, YOU IDIOT!!!
Bloke sitting nearby: Mate, save some for later, ay?
Shoutah: Sorry, coach.

Seems to me offence is doing okay, defence sucks. Freo ends the quarter in the lead.

Second quarter
Much the same, but in the opposite direction. The FILTHY TIGAAAHS are a bit quicker with the ball.

Guy in the Number 31 jersey: Hello, anklebiters. I am approximately fortyseven feet tall. My whole job here is to reach over everyone’s heads and simply knock the ball towards someone in my team who can do something with it.

A bloke behind me yells at the Dockers to play it forwards, not backwards. Then yells that they’re going in the wrong direction. Then suggests they should stop playing backwards. He is so monstrously pleased with this excellent joke that it will continue throughout the entire rest of the match.

Once the Dockers get ahold of themselves, and it, they pop a few nice goals. Defence still appears to me to be fumbling like absolute crap, but they finish ahead.

Third quarter
The Dockers pack it in. Apparently there have been some substitutions that I didn’t notice so they have ‘no bench’. This is a bad thing, especially as everyone is apparently out of puff and has had it up to here with those swift-footed, glue-handed FILTHY TIGAAAHS who are zigzagging about like Harry Potter chasing a particularly madcap Snitch. It is quite impressive, but I am wearing a purple shirt (I actually was, by the way. On purpose), so I must despise it. The Dockers are playing like A BUNCH OF GALAAAAHHHSS!!! and Shoutah thinks they should USE THEIR EEYYYEESS!!! as well as KICK IT LOOOONGGGG!!! An eleven-year-old girl in the next section giggles, wide-eyed, at every increasingly apoplectic outburst. But the Dockers refuse to take Shoutah’s advice, and also keep dropping the ball. Right before the klaxon, they hoof in two field goals (terminology, anyone? Field goals? Just goals?) within about three seconds, but are still way behind. 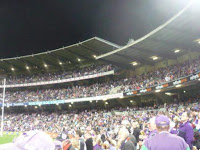 We all start in a slough of despond and can barely muster the energy to care. But a la Tim Henman at Wimbledon in the 1990s, this appears to be the only position from which the Dockers can sit up straight, brush their hair and achieve something, because they start clawing it back and actually manage to hold onto the ball a few times. A kick that goes into the side bit rather than the centre bit of the goal brings them back within a point. This means that every time a FILTHY TIGAH so much as touches the ball, we must boo like crazy. We bite our nails. Shoutah loses his shit completely, and the previously-giggly eleven-year-old girl in the next section quietly switches seats with her dad to be further away. The Dockers somehow manage to pull ahead and even I get that all they need to do now is play for time.

And yet. They do not.

The TIGAAAAHS win it, and the match ends just as a Docker aims a kick on goal that wouldn’t have gone anywhere near. As one, we clutch our heads in despair. Shoutah digs for a heart pill.

Sports. Clearly much better live than on television, where I've always seen them as a sort of spacer between real shows.

The stands in Freo must have absolutely looked lovely, like a field of shouting violets. I'm no fan but I can't think of a North American major league anything with purple as its team colour.