the weariness of the long-distance folky

Y'all know, I am a folky. I love folkiness. I embrace it. I would not mercilessly ridicule it if deep down I did not bear for folkiness a love that knows no bounds.

After all this time, this is where we're at?

There were morris dancers, at our local folk festival, dancing Bonny Green Garters. This is often quite impressive (in morris dancing terms, which of course is all relative), in particular when a very large number of them dance it all together. Here, though, there were precisely four dancers. They did another one called Step and Fetch'er (o gods, ask me how I KNOW) but inexplicably, to the tune of Waltzing Matilda. Average audience: two people.

In a startling oversight, the festival organisers had not employed anyone to sell didjeridus. Luckily, some harpmakers stepped in to cater for all those with a pressing need to spend huge amounts of money on a large and unwieldy musical instrument they will never be able to play.

We must set aside that these women had clearly become as disoriented as a litter of panicked kittens as they tried to escape the Wacky Children's Entertainer wardrobe, for they were by far the most engaging and musical people there. 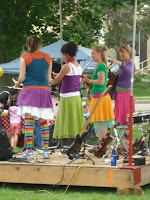 Food provision: as ever, a 'home made' lemonade stand. "Lemon tree, very pretty/ and the lemon flower is sweet/ but the fruit of the lemon/ is impossible to eat," says Judith Durham, so it must be true. But apparently if you sock it in a polystyrene cup with half a kilo of sugar and charge nine dollars for it, well. Suddenly possible.

Suspicious absence of anyone playing Michael Row the Boat Ashore on an ocarina, though. Weird. I bet there was one there somewhere.

I just...people, the folk revival was fifty years ago now, and I used to find it reassuring that these things have been the same the world over since god was a boy, but this time? It made me so weary. We gotta do something.

Labels: is it me?

I will support your cause (as long as it doesn't involve wearing costumes/sandals with socks/a tie-dye t-shirt/fairy wings... on second thoughts, I might be persuaded on the wings)

Oh my goodness, I totally agree.

It's like the Fringe festival in Saskatoon. I mean, I remember when my teenage friends were doing the army pants
/dreadlocks/patchouli/play the guitar on the corner/hackeysack thing/making hemp jewellery thing. And yet. It's like there's a school for this. Every year, fresh faced youngsters being 'different', but the same. And these are the ones at the folk festivals, inexplicably buying fairy wings, which I have never understood. It is exhausting.

We need a new movement. How to begin?

Pants, you're back. Thank goodness. Maybe it is just because we are in between the fresh-faced youngsters we once were, and the deckchair-toting oldsters that it is our destiny to become. Maybe we just need to wait a few more years for it to come round for us again.

I don't know about you, but I begin to feel a teeny bit depressed.