ring out those bells (again)

Ah! Hello, winter solstice, longest darkest night of the year! We meet again. Why, it seems as if just six months ago you and I were rubbing shoulders back in the northern hemisphere. Good times!

The local government of Perth has had this whole bell-tower built – not especially for solstice bells, to be sure, but...they could be for that. 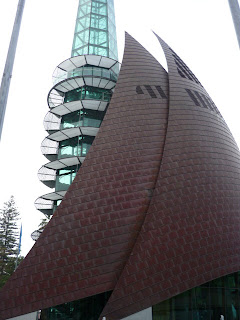 And I am here to tell you, I have not run into a single West Australian with one good word to say about the bell tower. It is in fact the very genesis of the question that marks you out as One Of Us or One Of Them: “What do you think of the bell tower, then?”

If you are One Of Us, there is but one answer to this question, and it is the same answer you would give were you asked “What do you think of someone who skins live kittens and eats them raw, then?”

Whisper it softly, but I am not One Of Us.

the rocket ship bell tower! i remember rinsing my feet in its moat. the perthite who showed it to me first said her uncle designed it or something, so my first impression (that people liked it) later had to be corrected...

Do you know why it is that they all hate it so? I don't dare ask in case I unleash a tirade.

It was for a long time considered fashionable in Paris to despise the Eiffel Tower. Maybe if we give the Perth People more time...

Yes. I bet even the Colosseum had its opponents: "That thing ruins the view from every one of the seven hills of Rome. Modern architecture, my eye."

Oh! I am a Perth(ite?) who likes the Bell Tower!
I just wish it had been bigger!

I'm not sure if I will be lynched for sharing State Secrets for saying this, but I suspect the biggest reason that Nobody Likes The Bell Tower is that We Don't Like New Things. Seriously! Perth people are pretty against change. (It can get a little frustrating)

Truth be told, we don't really like anything. Harrumph!

KM, quick! I'll distract them all while you run. There's still time to get away before they take you down.