Better be making your wedding dress

Stitched all around with a golden thread

Stitched all around with a golden crown

Gonna be married on Saturday night

All she’d do was just sit and sew

There are those who say this Appalachian song is about a relentlessly hopeful and ultimately jilted bride. She’s stuck at the end of the song with nothing to do but sew away as all her chances pass her by.

Well, I mean, nobody’s wrong in folk music. It’s all about interpretation.

But they are mistaken.

This is a bride who’s read up on her Greek myths, and taken a leaf from Penelope’s book.

ODYSSEUS: Pen, my dearest, I gots to go and do something manly. Be right back!

GENTS OF ITHACA: Penny, you are HAWT. You should totally marry one of us.

PENELOPE: Oh dear. Well, as it goes, I’m inconveniently right in the middle of weaving a burial shroud for Odysseus’s dad. I’ll pick one of you absolutely as soon as I’m done.

ODYSSEUS: Hey my lovely wife! Sorry I was ages. I missed you like whoa.

PENELOPE: Me too honey! Incidentally, there are about a hundred men around here I would really like you to say hi to, when you get a minute and have a sword handy.

This Appalachian girl doesn’t want to make a decision. “Nope, I’m still sewing...no, not quite ready...try Tuesday week...oh, no, sorry, still not done...” The freedom not to decide is small but significant in a folk tradition where girls often don’t have a lot of power.

It doesn’t have to be husbands; it’s more that not making a decision - on anything - means you get to keep all the decisions open. The minute you make a decision, you unmake a million others. Once you decide to do x, then you know you’ll never do y, and it reduces the likelihood you’ll do a, b or c, too.

That you may not really all that much want to do y or a or b or c is academic. It’s just the fact of those possibilities existing, and not existing once you have decided. Penelope and the Appalachian bride keep their freedom to not make a decision by never being quite finished their weaving and sewing. 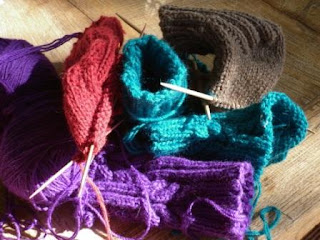 The socks don’t lie. I’ve got some decisions to make.
Posted by Amber at 05:19

YEEEEESSSS!!! You've cracked it, now THAT is the reason I don't make decisions - because I don't want to close off any avenues (not because I am simply incabable of just making a choice!)

I wonder if this excuse is going to do better than any of the others:
- I'm a Libran
- I don't want to disappoint anyone
- I am so thoughtful that I will let somebody else make the decision so they can choose what is best for them

Lots of reasons, trouble is, which one do I use...?

I've always read that song your way, that the girl just plain doesn't want to get married yet so she's putting it off. It wasn't until you pointed out that it could be read the other way that I saw it. That probably says a lot about me, doesn't it.

Your rewrite of the Penelope situation was perfect.