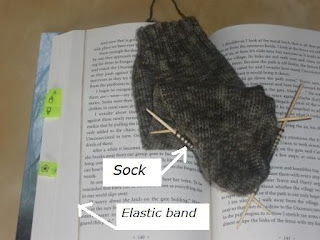 I do not like zombie movies. I wondered about a zombie book, to be truthful, but I heard it was awesome and must be read!! So I read it.

I had to go to bed one time in between starting this book and finishing it. Going to bed in the middle of this book is not recommended.

It is scarier than zombie movies, but in a much better way.

The characters’ world is post-zombie apocalypse, and people are hemmed in their village(s) by metal fences that keep them safe, but the zombies – (‘the Unconsecrated’) are always there. You can hear them all the time. You get used to seeing them ‘tearing [themselves] against the fences’. They can’t die; they just batter themselves into an ever-weaker state. They are the people you loved, the people you grew up with, and you want them near you even though you don’t, and you have to live knowing the only reason they want near you is hunger.

The change that precipitates the action is a breach of the fences, a village attacked; survivors head out onto unknown narrow enclosed paths through the Forest. The tension is heightened all the time, because the Unconsecrated are there against the fences as the survivors walk. Blunted, torn fingers tangle in hair if they stray too close (scratchy zombie Hands, survivable; bitey zombie Teeth, prognosis not so hot).

So unlike zombie movies when OMGsuddenlyzombiesarehappening!!! Howcanwestopthemandsavethewoooorld?? , you start out in a place where life just includes them and always has. Which is quite the paradigm shift. There are procedures in place for when a living person gets bitten and starts to Turn; Guardians and gates and ropes. The bitten have options, while they’re still with-it enough. People get used to it.
*MILD SPOILER*
I cannot stress enough that the zombies are always there. Did I say that? Always. There. When the survivors make it to a better-prepared village, with treetop refuges, it’s clear people are equipped to just live on while below, scores and scores of the Unconsecrated shamble and crave and moan without cease.
*END OF SPOILER*
To be a bit serious for a sec, most of us will never have to live in a world where any real level of danger becomes just part of our daily lives, and where we have to scoop bits of hope when there’s no evidence there’s any good reason for it. But plenty of people do, and that’s what’s terrifying about this book’s world – that every decision in life has to be crafted around that horrible relentless truth.

Also, rope bridges. I recommend working on them. Preferably before the zombies are actually breaking the doors down. 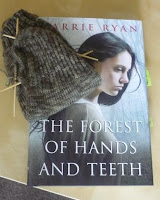 And also, look; the birthday socks match what Mary is wearing on the cover of this book! I made awesome zombie-fighting birthday socks!! So the birthday recipient will, if nothing else, be dressed for the zombie apocalypse.
Which may be all some of us can hope for.
Posted by Amber at 10:57

I know there must be something I can say about the sock-and-zombie combo, perhaps even something witty...

Back to the Research (just had to get my blog-fix)