Hey, remember that time the NDP and the Liberals and the Bloc put on their big girl boots and went to see the headmistress and told her they didn’t like the class bully any more?

For non-Canadians: this happened around November last year. Prime Minister Stephen Harper had been running things here in such a way that meant every time he wanted to pass legislation, the other parties had to either vote for it, or force an election (this happens when you attach a confidence vote to everything). Naturally, nobody wanted to force more elections – which are costly and get people’s backs up – so a lot of legislation got passed.

This worked for quite a long time. Until it didn’t. Eventually the other three parties went to the Governor-General and said a) they didn’t like being pushed around and b) the government didn’t seem to have much of an economic plan, so c) the PM had lost the confidence of the House. They proposed a coalition. (the coalition would be the Liberals and the NDP – the Bloc wasn’t going to be part of it, but supported it).

It may not appear so from my rather pedestrian summary here, but dudes, it was a massively exciting few days. Leaping from largely symbolic head-of-state to political superhero in a single bound, the Gee Gee had the fate of the country in her hands. 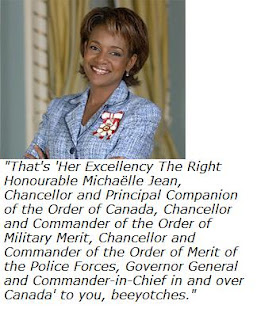 She had the following choices:

1. Dismiss the PM and force an election.
2. Suspend parliament and give the PM time to get his act together.
3. Officially ask the opposition if it was ready and able to form an effective government, and hand it power.

Given the opposition had already been to see the Gee Gee and told her it was ready and able, it actually seemed Option 3 was a probable step.

Option 2 seemed unlikely, because at the time we were all in the clutches of the Global Economic Crisis (ah, remember that?) and not only did the government not have an effective plan in place, but having no parliament sitting at the time would surely just compound the problem. And if she wanted to dismiss the PM, the opposition was already raring

to go, rendering the election in Option 1 unnecessary.

But we all learnt a new verb that day: ‘to prorogue’. ‘To suspend,’ in parliamentary-speak: the Gee Gee decided to prorogue parliament. Suddenly we were all using it as if we always had done in regular everyday conversation. “Oh, we were going to paint the house, but we’re proroguing that till spring.” “I might prorogue my cup of tea till after this episode of McLeod’s Daughters has finished.”

And now, here we are a year later, and H1N1 is upon us, and everyone is coming unglued because there aren’t enough vaccinations for everyone right now and people’s access to them has been, as it were, prorogued. Why? Ah, well, you see, they stopped producing the adjuvanted vaccines, because (until last Friday) they thought the non-adjuvanted ones were better for pregnant women, so they stopped the line of adjuvanted ones to produce more of the other kind.

Why yes. Adjuvanted. Wasn’t that always part of our lexicon, just like prorogue was?

It is comforting that at times of political and social crisis, we can all take a moment to expand our vocabularies.
Posted by Amber at 10:24

Amber, you are, arguably, the most creative writer I know;)
Loved this one!