Friends, the time has come to speak seriously about something very important. 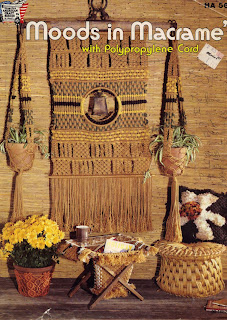 This excellent publication came from the library book sale at a cost of one of your finest earth dollars, and I can feel your envy all the way from here.

There is one among you who once told me tales of an office in which, on quiet Friday afternoons once the bosses had departed for their afternoon of golf and alcohol, the secretaries all indulged in a heady afternoon’s macramé-ing. (There are others of you for whom the afternoons of the mid seventies emphatically did not involve such pursuits, and who frankly may be in slightly better shape now if they had).

The observant will have noticed there is something amok with this publication. Because this is not your traditional 1970s government-office secretary macramé. This is cutting edge, the-80s-will-be-here-in-three-years macramé, and that means macramé with the most modern of materials.

As the book notes, polypropylene is ‘washable, colourfast, mildew proof, durable and practical for interior and exterior macramé.’ But perhaps most importantly, ‘the ends of polypropylene cord can be fused together over a candle flame for easy splicing’. It is not, then, a staggeringly massive surprise to find elsewhere on the same page a notice that ‘disclaims any liability for untoward results and/ or for physical injury incurred by using information in this book’. This is not macramé for the faint of heart. 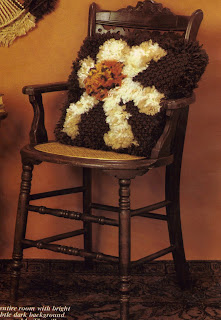 This pillow cover design will ‘liven up an entire room’ – presumably because nobody will actually want to sit down on something as deeply uncomfortable as a pillow made from polypropylene cord. Other project descriptions include the following: “the lines of this elegant design are reminiscent of the slender loftly towers of the Near East, from which holy men cry the summons to prayer”. So you can see, this is some pretty amazing macramé.

The magnificent project on the cover page at the top is called ‘Bell of Yama’. There is no such flowery project explanation for Bell of Yama. Bell of Yama simply is. If you need Bell of Yama described, well, then, maybe you just don’t get Bell of Yama.

Its ingredients include 660 yards of gold polypropylene cord, and a ‘large cowbell’. In fact, the total amount of polypropylene cord needed for this project is SEVEN HUNDRED AND THIRTY. And yes, that would be just shy of HALF A MILE.

Something tells me that Bell of Yama is not a project those office workers would be secreting in their desk drawers.

I, however, am going straight down to the yachting store to tell them I’d be willing to import the cowbells and we can work out some sort of kit cost. They probably don’t even know what a goldmine of creativity they’re sitting on there, with their endless polypropylene yardage. The macramé revival starts here.
Posted by Amber at 05:47

I agree. you're a genious

And just in time for the holidays!