United Nations statistics show that Fremantle has the world’s highest population concentration of Ageing Hippies. To a man they are quite the loveliest people you are likely to meet, but the dietary requirements of the Ageing Hippie have necessitated my altering my baking habits fairly radically. Because United Nations statistics also show that the least-favourite word of the Ageing Hippie – one that many won’t even allow in their vocabulary – is ‘wheat’.

And naturally, unless whatever you bake is organic, they won’t touch it.

Some even go as far as dairy-free too, but that is the point at which my fingers firmly go into my ears and I start singing The Real Thing real loud to distract them into reminiscing about their misspent youth.

My one previous gluten-free baking effort years ago resulted in a cake that was effectively a large ship’s biscuit that would have made a sound and stable bookshelf or coffee table. Unwilling to waste perfectly horrible food, I tried to salvage it by making it into a trifle, assuming the fruit juice would soak into the hard cake and make it delicious. Not so. The trifle ingredients simply sat aboard the dismal mahogany-solid slab it undeniably was.

Now, I have no choice but to sally forth and give it another whirl.

I quickly decided anything large-cake-adjacent was not the way to go, due to the lack of rising that goes with anything missing the crucial ingredient that makes it rise. This recipe was one that used whipped egg whites to make the cakes light and fluffy – which is exactly what resulted in the ship’s biscuit effect last time, so I didn’t hold out much hope. To counter an almost-certain failure, on the same day I also opted for

...because cookies don’t really need to rise to be any good. The batter for the cookies, frankly, tasted as if the Delicious Batter Fairies had dropped by and waved their wands, and I ate at least a third of it before it reached the baking sheet. Thereafter, though, disappointment lay ahead: 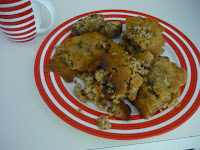 because the other thing gluten does besides make things rise, is make them stick together. The cookies ended up as a pile of (still tasty) soft cookie crumbs, which were nice spooned up, or strewn carelessly over your breakfast cereal, but did not in any sense resemble cookies.

Astonishingly, the coconut-lime cakelets were TOP NOTCH. They were springy and squishy and moist in exactly the right measure, and I could not have been more charmed: 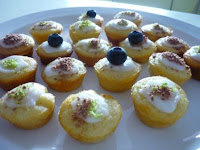 One win, one fail, for gluten-free.

There was only one thing to be done with that massive windfall of lemons, and that was to crank out a batch of lemon pies. The lemon custard filling was smashing. The pastry, this time, called for maize flour. And I am here to tell you: maize flour pastry is what they serve in the canteen in the sixth circle of Hell. It tastes of nothing so much as licking the yard of a busy riding school just after the mucking out but before the sweeping up. It was that bad. And, for the record, pastry is supposed to melt in your mouth, not fall apart when you so much as look at it sideways. I couldn’t say it completely ruined the lemon pie, but it sure didn’t do it any favours. And pastry that you simply want to spoon the filling out of is not, in my book, pastry you ever want to make again.

The batter was promising; it looked like brownie batter made using real flour. This one was supposed to have rice flour, but I ran out, so barley stood in. I went with cupcakes again instead of one big slab. This recipe resulted in a curious two-tier cake effect: the tops of the cakes were perfect brownies, both cakey and chewy, while the bottom halves simply followed their wayward banana choc chip cookie cousins in utterly falling to bits. Again: gluten makes things stick together. Tasted delicious though. These recipes all come from the same book, and – except for the maize pastry horror – I cannot fault it on taste.

I give this a fifty-fifty on success.

I make these all the time, so it was just a case of subbing rice flour for real flour. They look like real sweet potato scones, and although the texture is a bit grainy, really, they’re...not bad. Straight from the oven smothered in butter, they’re awesome, but that’s something that can be said of so many things, so isn’t really a reliable gauge.

More of a win than a fail.

GF cooking is playing with me. It gives me just enough to get my hopes up, and then it whaps out something like the maize pastry to put me back in my place. Which is why, for Valentine’s day, I eschewed GF with a firm hand and made these: 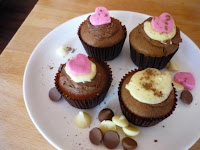 Real flour, cocoa, pure buttercream icing, refined white sugar, and pink hearts no doubt made of something synthetic and dyed with E numbers. And you know what?

Not a single hippie complained. And every cake was eaten. (one person was seen to quietly set aside the Pink Heart That Harbours Chemical Evil – and then write a folk song about it – but the others knocked those suckers back).

No doubt the following week was plagued with Wheat Headaches, but that is assuredly nothing a lentil-and-barley poultice can’t handle.

Dude, are you using xanthan gum in your recipes? This is the GF glue.

You are a better woman than I. I have tried the "from scratch" GF baking, but it is a huge pain (like gathering 17 different flours from around the world to make a cake, when mixes are readily available). I use GF flour mixes - like Pamela's and Namaste. Someone else does the mixing work and gathering of exotic flours, and they work in most basic recipes (I have not tried pastry, but muffins, etc, work good).

Having said that, GF food has, like, zero fibre and about 3 times the calories so...anyone who does it and doesn't have to is silly.

How does it have no fibre? Have you eaten millet flour? It's effectively grit. And why three times the calories?

I do wonder why you always need several types of flour to make one thing, in all these recipes. And now it seems I need to put xanthum gum on my shopping list too. Good heavens.