Careless, careless, careless. But it’s definitely slipped down the back of the radiator in the last few years, and I haven’t put my hand down there, because it is a haven for dust bunnies and stale biscuit crumbs and fear.

I can still read French pretty well. And in my head, practised and re-practised, I can have a decent conversation (because I know exactly what the other person is going to say). But out in the world? My French is too fragile to survive.

Example: I spoke French to someone the other day, because he was struggling to find one or two of the English words to formulate the question he was asking me. When he’d heard me answer, he responded. And I panicked, because he wasn’t in my head, so I hadn’t made up what he was going to say.

All it was, was ‘Ah, whereabouts in Canada are you from?’ and I didn’t get it.

This proves two things: one, having once been fluent, I would barely pass my Basic Listening French GCSE these days; and two, I obviously still quack like une vraie Québécoise.

I just recently went to Fairbridge Festival, and I was half-inclined to avoid the Canadians (Genticorum, James Keelaghan, Hugh McMillan) because I figured hearing them would make me homesick and sad to be here, and I am not at all sad to be here, but music can be sneaky that way. In the end, I didn’t avoid them, and they did make me cry like a baby, but in a good way, and anyway some Yahoos, and others, reminded me of what I would miss were I back in Canada, so it was okay.

Pascal Gemme of Genticorum is, weirdly, a dead ringer for Michel Bordeleau circa 2001, whose leaving of La Bottine Souriante I never quite got over, and thus got a bit out of the habit of listening to them. But my festival experience (complete with camping in this jolly SWAG, natch): 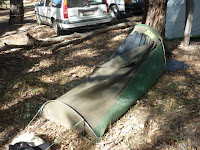 made me wheel out some French-Canuck tunes when I got home. I had to write a bunch of articles right off the bat when I came back, and my brain was right in that place, concentrating really hard on fact-checking how many flights were cancelled in Europe and on whether a quoll is a marsupial, when I suddenly realised my lips were shaping themselves unhesitatingly around the words of every single song that came out of the speakers. Jeunes filles mariées aux (dreary) avocats; jeunes hommes qui sont des premiers marins; even one with a pun, where the joke is that ‘trop petit’ (too small) sounds like ‘rôti’ (roasted) - a joke that’s possibly a biiiiiiiiiiiiiiit too laboured to bother explaining here. It was as if the French was the motor part of what I was doing, while my brain was otherwise (dis)engaged.

Frankly, no, being fluent in 19th century chansons à repondre is not spectacularly helpful to my communication skills. But it is a bit comforting to know it’s still in there, someplace.

I can almost hear the fiddle and rhythmic foot stomping behind those lyrics.

Hmmm. That podorhythmie business has got to be a bugger in thongs. I doubt it'll catch on here.