I am a treehugger. You know this to be true. I take my canvas bags to the supermarket and my travel mug to tea and coffee shops and recycle and compost and don’t buy stuff or eat meat and I get fair-trade tea and use solid shampoo because it's made without palm oil and doesn’t come in a plastic bottle and most of all, I ride a bike and take the bus. I’m not on the map as far as cars are concerned. The Top Gear men would hate me (even though I actually find them quite charming and watchable, for ridiculously posh wealthy petrol-headed hoons). I don’t, in general, much enjoy the burning of petrol to get places you could get with the burning of a bit of leg energy just as well.

A year ago, I had a car, to get to a stupidly distant job. The best I could do was find a small and fuel-efficient one and carpool daily. Since that time ended, it’s been bike and bus all the way.

But I have to admit to you, that in the last week, my hero, whom I love with a love that knows no bounds at all, at all, is: 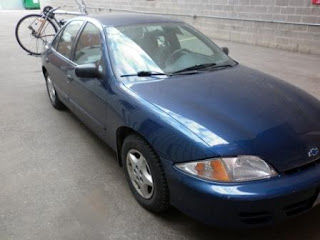 I have a new job, and a new home. It’s a long long way from where I last lived in Canada. More than 3,000 kilometres. And everything I own – which to many people, doesn’t amount to much, but is still quite a lot to me – was located near to where the old job and home were. It had to be moved from one to the other, and so did I.

This, my small and fuel-efficient hero, is what got me and everything I own – that is, EVERY. SINGLE. THING. I. OWN. – more than three thousand kms in three days, without a complaint. Without a squeak, a moan, a groan, a hiss, a crunch; without even a polite request for a refreshing drink and a bit of a sit down.

It took me safely around scary Detroit in the early hours with news of a gas station carjacking shootout on the radio;

through the centre of Ann Arbor because of my creative map reading; across the rest of Michigan in such a flash I hardly noticed;

over the Chicago Skyway, pointing out the baseball stadium and a building with funny white ears on the way, and politely ignoring the oddly pull-y camber of the road and the continuous stops for bizarre mini-tolls of sixty cents every ten paces;

into and through Wisconsin without requesting fresh cranberry juice, or asking to stop at the restaurant with the name you’d never hear in the UK (The Bog) or even at the Wisconsin Indoor Kalahari Experience;

purred happily along the beautifully-paved highway between La Crosse and Madison;

joined me in a juvenile giggle at Minnesota’s billboards for Stearns Vet Outlet and Pharmacy (We Do Cows!);

stepped easily up to the challenge of the 75 mph speed limit in North Dakota that meant we zipped through the state like a dose of salts;

nobly protected EVERYTHING I OWN through one night parked in Eau Claire and one in Brandon, Manitoba...and proudly rolled me home more relaxed and content than I’ve felt in a while.

It’s been treated to a nice new set of winter tyres and a service, and as a true hero should be, was allowed to rest on its laurels for an entire day before we headed off flat-hunting together.

Last week I was on the bus to my new job, outside temperature minus four. The woman sitting next to me commented, ‘well, I guess we’re getting our Indian Summer at last!’

Welcome back to Canada!

That must be one tired car, I can just imagine it sagging around the front grill, cartoon style - headlights like eyes... (by the way, the bonnet looks really loooooong, or is that just the angle of the pic?)

I too am a bus fiend, though buses here a far from "green" as they churn out black smoke... still, so do most of the other vehicles and at least I am sharing the ride with four thousand other people (okay, maybe only a hundred odd on the single decker). I also tuk-tuk pool unless I am getting one after standing for an hour waiting for a bus that obviously isn't coming, by which time there is nobody around to pool with...

I fess up to buying water in plastic bottles as I have an ant problem that would not go well with a filter machine (ants commit suicide in my kettle!) In my defense, I do re-use aforementioned bottles and they make handy little pots for new seedlings, odd screws, etc. when cut in half.

Question is, will I be forgiven for using a car when I eventually learn to drive in a bid to sometimes be able to regain 90minutes a day of my life?

Hmm, this is more of a letter than a comment. Great to have you blogging again! G x

Thanks owldaughter. I'm happy to be home. Part of me is wishing for Montreal, but the prairies are good for my soul too.

G, it's like when you take a photo of a horse from head-on, and its nose looks gigantic and the hindquarters taper away into the distance. Also, I love that you live somewhere where tuk-tuk pooling is an option.

Ah, minus four. I remember that fondly.