For holiday giftitude this year, I decided to only get people exactly what they wanted. Often I spend a lot of time thinking of something [that I think is] cool and unusual that totally goes with someone’s interests. But the thing is, everyone gets a lot of gifts. Not only is there Christmas and Hanukkah but there are a tremendous amount of end-of-year birthdays within my closest and mostest. And the thing I thought of was probably fine, but it wasn’t something they said they wanted, it was just something that kind of goes with them.

In the past I have also made socks for people. Because, well, even if socks don’t necessarily ‘go with your interests’ as such, I still think someone spending time to make you something nice by hand is a good gift. One reason I like to make people socks as gifts is because it means I was thinking of them, and spending my time producing something that is especially for them. To me, it’s meaningful.

I am still going this route in one direction; possibly two. But for everyone else, this year is the ‘just pick something off the list and buy it’ year.

This may sound a touch cynical and easy-way-outish. Well, it sort of is. I am making myself an easy holiday after all the travelling and moving and jobhunting and so on. But if there are Amazon wish lists out there, and there are HBC registries, and they have on them things that people said they wanted, well, why not point and click? You said you wanted it; here it is.

Then, quite recently, my dad threw a spanner in the works. When are you going to do me another pair of socks, then?

So my dad would really actually like - he said he wants - a pair of socks. A week and a half ago, I decided I would just about have time to squeeze in making a pair and mailing them. 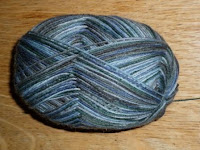 This, friends, is lovely yarn. Look at it. I absolutely knew it was going to self-stripe in an interesting colourway and pattern. It’s Gawayn and the Green Knight foresty – pine foresty, the dark green and silver-grey-blue of evergreens and mythology.

And lo, the silver-blue behaves and interacts very nicely with some of the other blended colours, interleaving row by row. Pleasing. 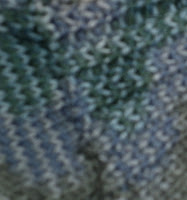 Then suddenly, this arresting weird-ass pooling effect with the dark green. What the hell?

It doesn’t get better.

I did not sign up for making socks with a map of farking New Zealand on them. I hated it more and more as I went along. I wondered if it would work differently if I had knitted it pulling the yarn from the inside of the ball rather than from the outside, but deadline knitting is no time to be experimenting in that way. I had to get these in the post, pronto. I decided the Pooling New Zealand of No Apparent Reasondom could go at the back and down the heel, where it would be covered by trouser, and carried on.

When I got to the foot, it did this:

So now the well-behaved interleavery of the smoky silvergrey with the other evergreen forest colours was pooling to make a new zigzag stripe – a New Zealand in negative, if you will, and right on the top of the foot – in colours pulled straight from my sister’s bedroom decor circa 1987: pale grey with dusty rose, lavender and powder blue accents.

None of which features in my dad’s favourite colour schemes, for socks or anything else. None of which is part of any legendary evergreen forests of yore. And all of which combine with the original New Zealand effect for a yin yang of Ugly As Sin.

I have two balls of this yarn, so my final bid to unbugger up this sock was to add in the new ball, knitting one round in the first yarn and one in the second, to try to break up the pooling. Break up the pooling it did, but it also gave me a random pattern last seen on the screen of my Atari computer during the 20 minute burr-burrr-burrr session it underwent while loading the Sammy the Sea Serpent game from a cassette tape.

I unambiguously hate this sock. I thought it was going to be lovely, and it’s ugly. It’s taken a lot of hours, and everything about it is off. I don’t even slightly want to give this to my dad for Christmas. I definitely don’t want to carry on, and finish it, and then waste even more hours making a second that is equally hideous. There is nothing to like about either the process or the product.

Emergency socks are on the go. There’s still time.

Maybe the yarn is protesting - perhaps it was never meant to be socks and will only look fab when it's bound for it's true destiny as a sweater...

It had occurred to me. But I am not mentally prepared to knit a sweater from sock yarn, because it would take me the rest of my life.

This is Amber's Dad. I have just received a lovely par of hand knitted socks from my lovely daughter. These are much appreciated and just what I want. I recognise the anguish, bleeding fingers and frustration she has gone through and I love her dearly: probably a bit more than I love my socks . So, a big thank you for my socks. A note for Canadians: the socks have only just arrived 14 January even though posted on 8 December. The British Postal system cannot cope with four inches of snow and 60 postmen were injured by slipping on ice. We have it rough over here in ;the Old Country. No featherbedding here. Eh?