how many toasters does it take...

Some many months ago, I was (unsuccessfully) attempting to combat a bout of insomnia with repetitions of On Ilkley Moor Bar t'at, and its theosophy.

Last night, it was economics, thanks to 24 Hours from Tulsa.

In the mid-1980s, a petrol, or possibly oil, company had a tv advert to promote its reward card. Everybody used Green Shield Stamps back in them days, so although the reward card scheme was identical to that, racking up points in return for paying for petrol, there was obviously some need to preach to the suspicious who were not sure about a plastic card versus tiny slips of gummed perforated paper that you were supposed to lick and stick onto a cardboard...card. (In reality Green Shield stamps just got lost in the glove compartment or were whipped out of your fingertips by the wind as you crossed the garage forecourt to your car. As a kid, I found it hard to get a handle on the Green Shield stamp. It was so important, because it was like...money. But they were always crushed and coated with mud in the footwell, or dinged to shreds in the ashtray, and the card was never about, and then sometimes you would find one among the pile of parental pocket change on the sideboard, and...wonder).

So. The petrol company (I googled it; it's Mobil) did this advert about the things you could get with your points, and the song went: "I was only 24 toasters from Scunthorpe. Only 6 double beds from Torquay".

Now, we all know, until very recently at least, supermarket points things - aside from being calculated to confuse foreigners - buy practically nothing until you have been accumulating them for four hundred and ninety years, and then your options are an acrylic tumbler with the supermarket logo on, or a keyring. (The reason they are meant to confuse foreigners is the way you are asked for the card relating to a particular points scheme when you try to pay for things. It's not a quesion, as in, 'do you have a Nectar card?' The cashier just says, 'Nectar?' - or here, 'Optimum?' If you are confused, or are foolish enough to ask for elaboration, it is customary to simply repeat, 'OPTIMUM?').

So to reach even ONE toaster, even a hundredth of a double bed? You would surely have to drive a considerable distance. Yet the singer is in a car, 24 toasters away from Scunthorpe. And six, count them, six double beds from Torquay.

You're wide awake now too, aren't you?

The furthest point in the UK from Torquay has to be John O'Groats. Torquay is way in the south west. It's only about 100 miles from there to Land's End. The driving distance from John O'Groats to Torquay must be something just over 620 miles. 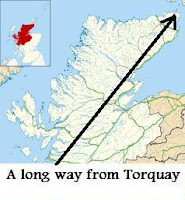 If I can earn 6 double beds from driving 620 miles, then...I can get a bed for going about 100. I could drive to London from Leicester, and I wouldn't even have to go back.

Conveniently, probably the furthest point from Scunthorpe is Land's End, since Scunthorpe is in North Lincolnshire. It can only be about 400 miles. That's 17 miles for a toaster.

Mobil, I didn't take A Level Economics. I didn't even take GCSE Economics. But even I can see that's financial suicide on your part.

This song was written before the Channel Tunnel existed. I guess you could allow for car-ferry transport to, say, Zeebrugge, or Ostend, thus opening up Europe and a much greater distance for the 24 toasters and six double beds to cover, but I don’t think that’s really in the spirit of the song.
However, since I still was not asleep at this point, I decided to allow for that Channel Tunnel they’ve got there, and assume Mobil must mean a much greater distance than the UK could offer.
Since I was in bed, I made some guesses about reward-points-to-litres-of-petrol ratios, and random looking-it-up after the fact bore it out – a litre gets you a point. 4.5 litres per gallon = 4.5 points (can you keep up with the maths?).
A nice economical little car like the Micra (I wish they had them here, but can you imagine driving on the Prairies in one? The people in their monster trucks wouldn’t even see you as they chewed you up into their front grille) gets about 50 mpg when driving long-distance. 4.5 points for every 50 miles.
Now, points-to-pounds. I don’t live in England any more but I’d say you could get a decent toaster for fifteen quid. (Not one that does eggs, probably, or has a muffin-or-croissant cradle on top for when you want to defrost pastries. But one that toasts.) The best-known supermarket points scheme gives you £2.50 for 500 points. 3000 points for the toaster.
Times 24.
72,000 points.
If 72,000 points gets me 24 toasters, and 50 miles gets me 4.5 points..then...16,000 miles. 16,000 miles for my 24 toasters.
As the crow flies, that’s beyond New Zealand. Driving distance, overland and through the Channel Tunnel (remember that far back? Still with me? Getting sleepy? Good) it’s got to be somewhere in Asia. Mongolia, maybe (I’m adding miles to detour through Iran around... that sea there, above Iran. My geography is about as good as my maths. The Black Sea? The Caspian?) 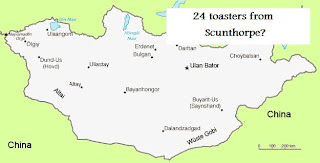 None of this, though, approaches the question of why, if you had 16,000 miles worth of points under your belt, you’d think of getting 24 toasters. I hear you can get some really good stuff from those points things now. There’s more to rewards than acrylic tumblers and multiple toasters.
Unless.
Unless you have a large extended family in Ulaanbaatar who all really enjoy breakfast, and you are looking for holiday gifts to take them, I suppose.
Posted by Amber at 23:31

I was in the exact frame of mind required for this post this morning. Love it. Bless you.

Thanks for the chuckle.

Perhaps the chap in the advert had a car that didn't get very good mileage to the gallon...

I live to serve, kids.