Radio silence; maintenance-level, low-functionality, etc. It’s where it’s been at the last couple of months. But you don’t want to hear about that.

You want to hear about this, and I want to tell you about it!! This is what has made me excited enough to come out of hiblognation: 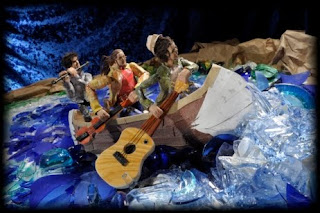 Why is this so so-exciting? I’m glad you asked.

Because it’s going to be awesome. Obviously.

Because of the cover. If you have facebook, which I don’t but I piggybacked on someone to look at it, you should seek out their page because you can see the finished cover there. But you must also look here at the designer's page If the best album cover in the world is not this one, with three hairtastic French musos rendered as wooden puppets paddling a canoe with their instruments, then kindly fax me an answer as to what is.

Because of the canoe. This is a voyageurs-themed album, and you know very well that I never met a folkloric canoe I didn’t like. Some of you in fact know that it was a folkloric canoe that brought me to Canada in the first place (no, not literally; but you are hilarious; what a good joke).

Because there is reportedly a song on it called ‘turlutte hirsute’, ref: my post months ago about how every time a Quebecois musician cuts his hair, a fairy dies. I am so joyous that these boys clearly understand the important hair-to-musician nexus, (ref: also that Pascal Gemme is far and away the current reigning Samson of Quebec music).

Because of weird coincidence. The title track – the title itself – comes from a French translation of the English-language 'Canadian Boat Song', that until I read about this album a few days ago, I had not heard of. Cut to a few days fewer ago, when I went to a book launch in Regina for a novel that deals with Confederation (good for my citizenship education). It turns out said novel, by chance, contains the Canadian Boat Song, such that one of the presenters at the launch gave a wee talk about it AND we all ended up singing it. This reminded me of another very similar flying-canoe-related coincidence that happened to me the first time I ever went to Quebec (I won’t bore you with it now). There’s something about this particular bit of my adopted country’s heritage that’s done me only good, and I feel quite certain this top-of-their-game, hair-reverent, coincidence-embracing, creatively-packaged record is only going to add to my conviction that this is the case.

Am I back in the blog? Not sure. The exam marking is approaching, so I’m ratcheting up a notch for the three-jobs-at-once season, which is never my best side. But thanks for waiting.