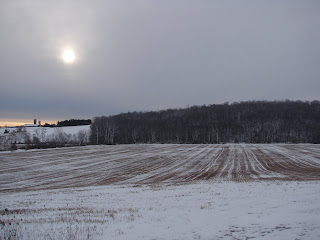 I truly suck at taking photos. I was going for the pretty copse of trees here, because they're all fetchingly snowed up one side like in a picture book. But then I got all taken with the valley and the farmland and the watery early morning sunshine.
Anyway, rural Ontario this last week has put me in mind of when Winnie-the-Pooh and Piglet go searching for a Woozle, following their own footprints in the snow. It all looks so astonishingly nonexistent-British-countryside-of-your-fictional-youth.
This is set to change over the next two nights though, as according to the Weather Network we are expecting a Significant Snow Event. They used the word 'colossal'. I live in the Snow Belt, it now transpires. (in the same way as I learnt the last move was into the Rain Belt, and the one before that was in the Minus Forty-Two Is Apparently A Real Temperature Belt. I'm all about the learning-by-doing).
I bet by the end of winter I'll have learnt to take a decent photo of snow. Looks as if I am about to get a lot of practice.
Posted by Amber at 22:29

Looks like one of the fields on my grandfather's farm. It might be - the farm wasn't too far from London. Have you been to Watford yet?

That is very pretty - makes you want to run out and build a snowman and go for brisk walks that bring a bit of colour to your cheeks.

Then you remember how toe-numbingly cold it is. Cold weather is great if you have a heated home to return to. (Sorry, I am suffering at the thought of winter here and that cold to the bone feeling that sets in until spring because "insulation" doesn't seem to be in the vocabulary of house builders here!)

Yeah - it doesn't look like this any more. We got about six more inches this morning and are due another foot or so tonight.

Not sure how I have never managed to end up in the My, The Tropics Are Lovely, I Think I'll Have Another Mango Juice Belt. Must work on that.

As one who has lived in many of the same Snow/Rain/Colder-in-My Backyard-than-the-Surface-of-the Moon winter climates I agree that a new sort of Belt is in order. Is there a Four-Subtle-Yet-Distinct-Seasons Belt where the weather won't kill you if you lose your house key and the insect life is mostly benign?