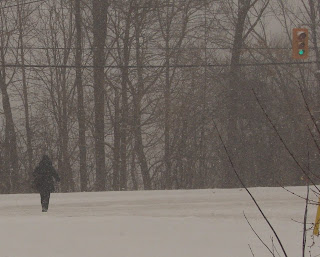 Gripped by a Deadly Storm!! The ploughs are doing their best, but the wind is whistling round like a film sound effect and the drifts are building (another new thing encountered recently: snow fencing. Temporary fences rolled out across open land alongside roads, so the snow drifts against the fence instead of on the highway.)

Some people, who are clearly mad as a bag of snakes, are actually still making their way out in it – including, bless them, the post office vans. The people walking by my window all look like Shackleton. I say, unless you are on your way to hospital with major organ failure – or on your way to hospital to perform surgery on someone having major organ failure – today, you stay indoors.
Posted by Amber at 10:49