At the doctor’s office this morning, two girls sitting next to me, with mobile phones, reading their messages.

Then, a man of about seventy walked in, and all the chairs were full. So I got up to give him my seat, but he said no. And then I felt kind of weird. What’s the right thing to do there?

Because to be sure, today’s men of seventy are nothing like seventy-year-old men of, say, the seventies, when being old was actually old. Today’s men of eighty aren’t even as old as yesterday’s men of seventy. You know? God. Nobody even gets half going till they’re sixty now. Compounded with, men of seventy are also of the generation who would give up their seat for a woman, regardless of whether she were older or younger. So maybe he was kind of pissed off with what I was implying by offering him my seat.

The young and the old are a mystery to me.

In other news, I did this last week, with hand-spun Saskatchewan alpaca: 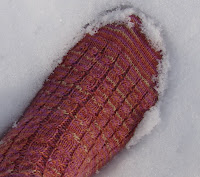 But I fear I may be too late with my talk about what happens when two socks love each other very, v

ery much, because then this happened:

By the way, I absolutely agree that socks is a crap gift for a soon-to-be-four-year-old, but let it be announced here that he specifically requested socks be made for him. Weird kid. But I am an obliging aunty, so here we are.
Posted by Amber at 12:42

Labels: is it me?, socks

I have been in the very same bind - offering my seat to an old man, only to have my offer rejected. I have also offered it to a very pregnant woman (when I wasn't) and same thing. Awkward.

I once boarded a crowded city bus and was left standing in the aisle with my 3 month old baby securely strapped to my chest in one of those corduroy Snugglie deals. It wasn't a terribly long bus ride - perhaps 10 minutes - most of the other passengers were elderly and I managed well enough holding onto poles and straps while balancing a large diaper bag on one shoulder and a holding a sack of groceries steady between my feet. When I finally stretched over to ring the cord and leave the bus, a woman looked up, noticed the baby's pompom hat just below my chin and rather loudly huffed "Well, you might have SAID something."