Let it be agreed: the loveliest men are the bald men. It is a great pity for the men that are not bald, to always know they are not the loveliest. But it is the way of things, and they will simply have to get over it.

If you are unlucky enough not to have one of these lovely specimens in your life, you may not know the following fact: every bald man secretly, deep deep down, wishes this were him: 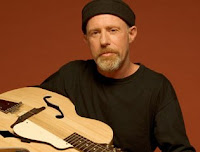 This is Harry Manx, and if he is not the coolest cat that ever existed in the history of the entire planet, then he is at the very least in the top, say, three.

The reason the bald men want to be Harry Manx is because this Hat is the way to rock bald like nobody ever rocked bald before.

If, as a bald man, you were to wear the Harry Manx Hat, you would be at least 25% cooler. It would confer upon you the aura of one who feels, thinks and kisses more deeply than other men; one who is sexier, more skilful and more imaginative; and one who might be about to hunker down with any one of about fourteen different instruments and oh-so-casually do something way cooler than anyone in a four hundred mile radius could hope to do even if he were trying really, really, hard and had a head start and the wind in his favour.

You can imagine, then, the combination of bald man plus Harry Manx Hat, would be a pretty freaking magnificent fortress of lovelitude. Beautiful ladies would almost certainly do things for that fortress. (The rest of us would, too, but the fortress would not need to look any farther than the beautiful ones).

So, if you are a person who does have a lovely bald man around somewhere in the recesses of your life, you should probably do him a solid and start looking into providing him with The Hat.

The first step to bringing the Hat into being, is observing the Actual Original Hat. It looks quite like it is made of felt, which is a problem in itself, because felting a hat – never mind The Hat – is a serious business that involves one of those head-shaped busts and is very, very easy to bugger up spectacularly. Felting slippers is one thing; you wear them on your feet and nobody really looks and it doesn’t much matter if they are a bit creative, but a hat is out there before everyone and it would be deeply unfair to make a man wear a crap hat, especially if he is supposed to be wearing The Hat and getting all its attendant benefits, viz., the fortress, the beautiful ladies etc.

But on closer inspection – that is, at a discreet distance of about eight or nine feet, because even I draw the line at approaching Harry Manx post-gig and saying “nice music, dude, but I really came to check out your Hat” – it’s definitely sorta stretchier than felt (a relief) but also has a bit of structure to it. Like it’s got a top and sides, rather than being more of a stocking cap affair.

That is awkward, because tops of hats are round, and knitting round things is hard.

Cue a yarn shop trip, Harry Manx album covers and bald man story in hand, and three of us figuring out a conglomeration of bits of three patterns, plus my usual hefty dose of making it up.

As with so many things, when you are told what something will measure in inches, you should remain sceptical until the thing you’re told will measure a certain number of inches is actually in your hands. The yarn lied and lied and lied to me, and the upshot was one false start that was too big, one that was too small, and finally, a baby bear one that was just on the small side of right. The Prototype Hat was born: 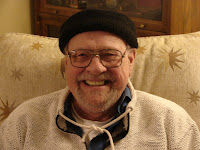 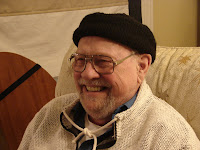 The Hat was not earmarked for the Aged Parent, but look: even the Aged P looks cool in the Hat. It’s infallible. (Also, hands up who else thinks Harry Manx might look like my dad when he grows up?)

It's not a bad start, but I learnt a lot from the first go and the Hat now requires some modifications. It will be evolving into a more accurate representation over the coming weeks. Bald (or not-bald) men and those who love them, you'd better start emailing me with your Hat requirements (address up there at top left; replace the AT and the DOT with symbols). You don't want to miss out. Your fortress might depend upon it.

Labels: admiration, loveliest men are the bald men, music, things that are not socks

Warning: mass producing Hats such as these could potentially bring about a kind of economic and social change hitherto unrecorded in headwear history. Women would very likely find themselves helpless and deep under the spell of Hat wearing men of such utter coolosity. When even Aging P's can look that good, what chance would we mere mortal women stand? I beg of you, do NOT share your Hat Secrets indiscriminately. These Hats need to be doled out with great caution and attention to the potential long-term consequences.

Well, the prototype was a quick version; getting it right is going to take quite a bit longer. 'Mass production' is hardly the word. (or the two words).

But I promise to be very, very careful.

Lucky me gets to make Harry's Hats. I even get hugs for them - coolosio. "It is all about the music" he says and because I am a hand weaver, I get to play music with my feet while weaving the fabric making each one different, although admittedly always black. Coolosity is the word, which although he particularly likes scratchy wool, in spite of much persuasion to wear soft wool or even cotton at, say the Kaslo Jazz Fest when the stage is in full sun on the lake and the temperature is much beyond scratchy wool, we all agree Harry is COOL.